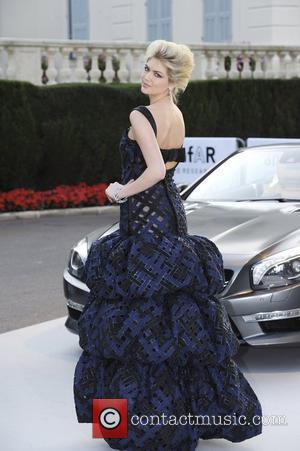 Model Kate Upton dropped by Jimmy Fallon's 'Late Night' show on Wednesday (June 20, 2012) to promote her patriotic cover for the July issue of GQ magazine. After discussing the risque shoot, in which Upton sucks on a red, white and blue Popsicle - the world renowned model showed Fallon her now legendary dance moves.
The Pittsburgh native first rose to fame after appearing in a viral video, in which she danced to Cali Swag District's hit track 'Teach Me How to Dougie' while watching a basketball game in Los Angeles. However, she created a sensation earlier this year by performing the "cat daddy" dance in her bikini, in a clip 'directed' by photographer Terry Richardson. As Fallon explained during Wednesday's show, the video was temporarily removed from YouTube for being too "steamy", though the host asked Upton if she could perform for his live studio audience. Obligingly, Upton cheerfully told him, "Of course. Why else am I here?", before demonstrating the dance move in her relatively conservative polka dot dress and heels.
Covering this year's Sports Illustrated Swimsuit Edition, Upton has risen to become one of the most talked about models in the world. During her accompanying interview for GQ, the 20-year-old admitted, "I understand why my male followers like me. It's like any job. You find your strengths and play them up".