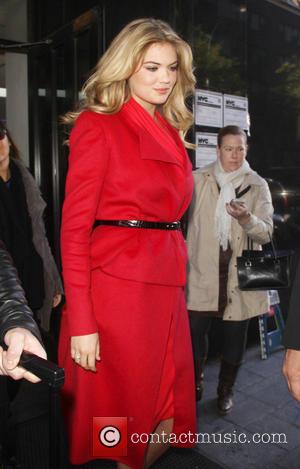 Kate Upton is being strongly linked to the female lead in the upcoming Entourage movie. The Sports Illustrated model is heavily rumoured to be in talks with casting directors over a potential role in the movie, The Warp first reported, citing various in-the-know people working with the Warner Brothers production.

The article from The Warp states that Upton has not been offered the role officially yet, however talks between the two are believed to be in the advanced stages. Warner Bros. had no comment to give on the supposed link between Upton and the Entourage movie, whilst a representative for Upton refused to acknowledge that any such talks were taking place, although they did admit that there is interest in Upton for the role.

The details of the models' potential role have been kept under wraps for now, although it is believed that she may portray the latest love interest of movie star Vincent Chase (Adrian Grenier).

Should she be appointed in the film, she will be joining returning stars Adrian Grenier, Kevin Connolly, Kevin Dillon, Jerry Ferrara and Jeremy Piven, who have all agreed to reprise their roles from the hit HBO series. After a long-fought battle over contracts, all of the original cast members agreed to appear in an Entourage movie late last month. The film is expected to pick up where the series left off, following Ari Gold's new career as a studio head. Filming is due to get underway early next year and the film is scheduled for a 2015 release, with no set date issued yet. Adrian Grenier, Kevin Connolly and Kevin Dillon will all be returning for the movie