Posted in Press Releases on 28 February 2014 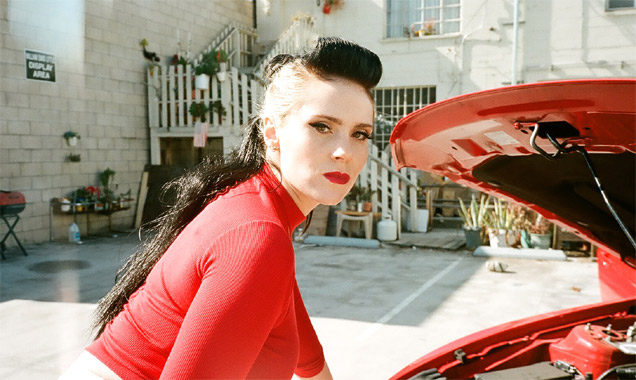 British Female Icon, Kate Nash will be hitting the road this spring.  The post punk singer-songwriter will be performing at various music festivals, most notably Coachella.  Check out the dates below:

One night in the early summer of 2012, Kate Nash was feeling emotional after a rehearsal with her new all-girl band. In the space of a few hours, she wrote and recorded Under-Estimate The Girl. By 4am the video was shot too.

'Under-Estimate The Girl' captured perfectly a moment in Kate's life. A moment when she wanted to tear up the rulebook and buck the trend for making the kind of benign manufactured pop born of talent shows. 'Everybody play, play it so safe/No one wanna mess, mess with the rules', she sang with such abandon and raw fury that it made punk look positively sedate. The song, with its change of musical direction, immediately caused a minor furore. Some thought, rather oddly, that she shouldn't be 'allowed' to record visceral, pissed-off punk. The NME simply concluded that it 'outpunked punk'.

Kate was, as ever in the face of the press, phlegmatic. 'Everyone was going crazy and I thought it was great. It created the perfect storm for my comeback. Everyone was talking about me because I'd done something new and crazy and different. In the end the response to Under-Estimate The Girl just showed how conservative the music industry is.'

With her first two albums, 2007's Made of Bricks and 2010's My Best Friend Is You, she found both mainstream success and a legion of young female fans who snapped her up as their very own post-punk feminist icon. She had hoped, as we all had, that the music industry was slowly becoming less sexist.

It's now seven years since Kate released her first single, Caroline's a Victim. Her childhood growing up on Harrow, north London, seems a distant dream. Still only 25, she is already a veteran pop star. She was a MySpace phenomenon before she even had a record deal. Such was the excitement about her debut album that Made of Bricks was released two months ahead of schedule. It went straight to number one.

Kate has always been wise beyond her years. An old head on young shoulders. And here she is, on the eve of the release of her third album, Girl Talk, worrying about the future of women in rock. She still feels that, despite the emergence of artists such as Lady Gaga and Adele, the world of music is dominated by men. And she is fed up of being told by journalists that everything has changed. 'There remains a huge gender gap in the music industry. It's impossible to deny it. And I'm sick of sitting around moaning about it. I don't want to talk about sexism, I want to fight it.'

Inspired by Rock 'N' Roll Camp For Girls, an American bootcamp started in 2001 to show girls that they can 'play any kind of music they want', Kate set up Rock 'N' Roll for Girls After-School Music Club. She travels to schools around the country, talks to aspiring young female musicians, listens to their ambitions and fears. 'Over the past 18 months I've interviewed over 100 teenage girls about image and identity. Most of them said they felt too ugly to be in a band. I was shocked. I want to make them feel good about themselves, make them feel entitled to create music if that's what they want. I've learned not to care what anyone says about the way I look. I need to be outspoken. We all have a responsibility to the next generation.'

What surprised Kate most about the Music Club was that talking to these young girls gave her strength. They gave her the confidence to made Girl Talk without looking over her shoulder at the critics and bloggers. She felt, she says, like a warrior. Already an accomplished piano and guitar player, she took up bass. She flew to Los Angeles to meet Grammy award-winning producer Tom Biller and they hung out for six hours straight. 'I can't tell you how good Tom made me feel in the studio. I've never felt that comfortable before.'

Girl Talk is a bold, passionate and personal album. There's been a romantic break-up in her life (which she would rather not talk about) and some challenging times with girlfriends. If My Best Friend Is You was about trust, honest, sexism and growing up, then Girl Talk is 'almost thoughtless'. By which Kate means instinctive. An immediate reaction to the world around her. 'I wrote songs really quickly. They are ballsy. You can hear the anger. I've learned a lot about people. I used to be really naive and trust people too much. Not any more.'

The reckless punk of Friend, in which Kate sings 'You said some real mean things to me', is tempered by gorgeous vocal harmonies at the end. On OhMyGod she jokes that 'All my friends are jealous of me'. The deeper, more sonorous vocals on Conventional Girl play with the push and pull of heartbreak: 'I gave you everything/You didn't let me in' is counterbalanced by 'I'm sick of being the bitch you think I am'. Even the fighting talk on OH gives way to reflective lyrics that suggest tears have been shed. It's a punk pop record that captures the anger of female artists before her, embracing as it does the ghosts of Hole and Bikini Kill.

Kate says that Girl Talk is a kind of mission statement about what it's like to be a woman. 'Working with an all-girl band has been incredibly liberating as well as being brilliant fun. I really believe in women being able to be whatever they want to be. We don't have to be one dimensional. I can be sensitive. I can be angry. I can do a song that is screaming and then add a backing vocal that is really sweet. I've never been one thing.' That her voice now has more range has helped too. 'I can do more; I can sing really low, I can even rap! There's a track on the record called Rap for Rejection which is about sexism.'

In some ways Kate has been given a new lease of life by her time in LA. Here she luxuriated in the climate and hung out with Willow Smith. 'She'd been working with Rihanna and Beyonce's songwriters, but then decided to write her own material and got in touch with me. She's an amazing 11-year-old, a tiny shaven-head girl with mind-blowing wisdom. Like her dad Will Smith, but without the moustache. I couldn't believe that she even knew my B-sides!'

The lure of LA might prove impossible to resist. After auditioning for the Bristol Old Vic Theatre School many years ago, Kate is now set to appear in two new films. In Syrup, based on a cult novel about a slacker hatching a million-dollar idea, she plays a receptionist and in Greetings from Tim Buckley she takes on the role, rather aptly, of an English punk. 'I will always love London, but I feel safe in LA. I think it may be time for me to travel for a while.'

Kate Nash is proving to be something of a Renaissance woman. She is singing, writing for both herself and Smith, acting, running the Music Club. She performed at London Fashion Week and cites Joan Jett, Karen O and Courtney Love as style icons. She says, definitively, that music should be fun. On the other hand, she says Girl Talk is a call to arms. 'When I was in my late teens I felt insecure about being girlie and feminine because people would judge me as a silly little girl. Now I'm confident enough in myself to be able to celebrate those aspects of my personality.'

She laughs. 'I can look sweet and cute and talk about fashion and make up. But I'm still fucking smart so don't mess with me. Don't ever under-estimate this girl.'