Kate Nash has attacked the music industry for what she sees as a ''sexist'' attitude towards female artists. 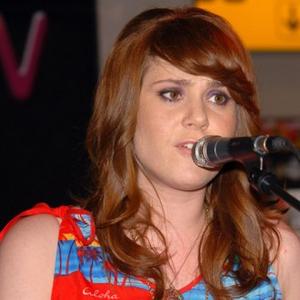 Kate Nash has revealed she is trying to change the "sexist" music industry.

The 'Foundations' hitmaker - who recently released her second studio album 'My Best Friend Is You' - has attacked the sector, stating the media refuse to take female artists seriously.

She told Stylist magazine: "I don't think the media portray women as serious artists - it's like we'll always be silly, quirky pop stars.

"You hardly ever see legendary female artists on magazine covers. I'm going to stop moaning and I'm working on trying to change it instead."

The 23-year-old singer and songwriter - who has been dating The Cribs vocalist and guitarist Ryan Jarman since early 2007 - admitted one interview in particular made her feel as though the music industry is sexist.

She explained: "One journalist asked me why I don't care about being sexy! I asked him the same question back because I thought it was really sexist.

"It can make you stronger but it can also make you feel weaker."

Kate recently said the most satisfying part of the songwriting process is having the opportunity to express her thoughts and feelings.

She stated: "Too many people are bland and afraid to have an opinion, because people will say, 'Oh, it's so shocking, oh it's this,' or it'll be reactionary, and it's like, 'Who cares?' "