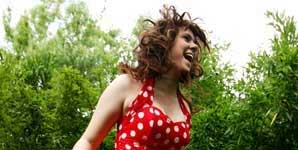 Whether or not you view Ms. Nash as the girl next door made good or an evil mockney stage school impostor, thereâs no denying a certain element of naÃ¯ve charm associated with couplets like âDancing at Discos, eating cheese on toastâ that dissolves any notion of hatred or disdain at once.

2007 has been something of a whirlwind year though, particularly as sheâs only put out 3 singles thus far, one of which, âCarolineâs A Victimâ, was the subject of much ridicule in cyberland subsequently resulting in said song now being disowned by its creator (much to the annoyance of my girlfriend I hasten to add) so much so that not only was it conspicuous by its absence from Augustâs rush-released âMade Of Bricksâ collection, but also no longer features in her hour long set either.

Which in some ways is slightly bemusing, as one would have expected Ms Nash to at least show some kind of reverence to the song that got her noticed in the first place.

Still, cheered on by fellow indeed celebrity beau Ryan Jarman of The Cribs, one thing that Kate Nash cannot be accused of is being lacklustre, and her irregular stool bouncing activities during âMariellaâ coupled with a heart-warming acoustic rendition of âBirdsâ prove that she is a more than able performer at songwriter at the best of times.

One accusation that she has had to put up with ever since âFoundationsâ and her subsequent albumâs release is that a large proportion of her material lacks the depth of the obvious strongpoints within her repertoire, and at times this becomes apparent tonight, with the midpoint of the set seeming nothing more than rehearsal room renditions of long forgotten album filler rather than quality assured ditties of the highest order.

Obviously it is the aforementioned âFoundationsâ that gets the loudest cheer as expected, its status as the yearâs most unlikely pop smash fittingly reassured.

Thereâs still a nagging doubt though that Kate Nash is quite ready for the attention thatâs been suddenly thrust on her; for starters the between-song banter weâve come to expect from almost every performer worth naming is almost non-existent, and only rears its head when she nervously mentions that her home made fanzines are available in the foyer at the end.

Which leads us to the main problem here, because for all the potential that Kate Nash has shown in her first couple of releases â and yes, I include the much-maligned âCarolineâ¦â here â thatâs exactly all there is to go on, potential, and as one swallow does not make a summer, a handful of good songs do not make an album, or indeed a captivating, hour long live set.