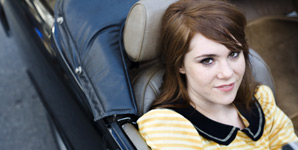 As parents drop their children off while teenage girls run around the cloakroom area throwing lollipops and empty cola bottles at each other, one could almost be forgiven for thinking they're at a school play, or at worst a Brownies social event. Still, we're thankful for small mercies as the excessive number of 14-year-olds already laying claim to a stage front spot ensures getting served at the bar is an absolute doddle, a rarity normally for any sold out show at Rock City.

First up are Florida's Black Kids, a band who it's fair to say have been hyped to the rafters and beyond since the back end of last year. Rightly so too, as anyone fortunate enough to own a copy of their extremely-hard-to-find debut EP 'The Wizard Of Ahhhs' will testify to.

Ambling onstage like five extras from 'The OC' (or indeed any Stateside teen-soap you care to mention), the focal points are undoubtedly the Youngblood brother/sister combination of guitarist and main vocalist Reggie and keyboard player/co-singer Ali. While the former sounds like a decaffeinated crossbreed of Robert Smith and Joey Ramone, it's the latter's more Spector-esque cooing, particularly when harmonising with fellow keyboard player Dawn Watley, that really add the delicious pop sheen which will undoubtedly propel them into the hearts and minds of daytime radio listeners later this year.

Highlights are aplenty, such as The Arcade Fire-go-punk pomp of opener 'Hit The Heartbrakes' and eighties disco raping 'You Can Be My Limousine', which owes as much to Prince circa 'Alphabet Street' as any lo-fi indie rock quartet. Not surprisingly, the biggest cheer is reserved for forthcoming single 'I'm Not Gonna Teach Your Boyfriend How To Dance With You', a song that's set to rip the charts in two very soon and the very reason Kate Nash asked the band on tour with her in the first place.

Although this is their first visit to Nottingham, you can be pretty certain it won't be their last, as the next time Black Kids are in this vicinity who would bet against them headlining such a venue as this? As an opening act though, they set the scene with consummate ease.

.so much so in fact that the arrival of Ms. Nash could almost be seen as an anti-climax. To say her rise to fame has been the equivalent of a cleaning lady's fast track to area general manager of some multi-national conglomerate would be an understatement. This time last year she was considered a bit of a novelty act, due in no small part to debut single 'Caroline's A Victim', a song which she now appears to have consigned to the dustbin with yesterday's leftovers from breakfast.

Now of course, with a Brit Award for Best British Female artist tucked safely under her belt and a Rock Star boyfriend in tow (Ryan Jarman is present this evening, star spotters), Kate Nash can seemingly do no wrong. Yet, take away all of the gloss and shine of her largely unabated rise and several cracks appear, albeit mostly down to a nervous sense of disbelief at the golden path her career currently finds itself floating along.

In-between songs, audience banter or even eye contact is quite minimal; instead we get the odd nervous laugh, semi-whispered introduction and the odd bum note false start one would expect from an early twenty-something solo-performing singer songwriter who was gracing the Social less than a year ago.

The set itself falls rigidly in line with last year's 'Made Of Bricks' long player bar the odd b-side, and even though no one can deny the effervescent charm of 'Foundations' and 'Merry Happy', admittedly two of the most note-perfect pop songs anyone has conjured up this decade, there's still a feeling that Kate Nash is still learning her trade, particularly as far as live performances go, in the hardest way possible; i.e. amidst the public arena mostly indebted to her every word.

Hopefully by the time her second album is ready the nerves will have been conquered otherwise Caroline may not be the only victim of what can be a harsh industry at the best of times. An open verdict then.