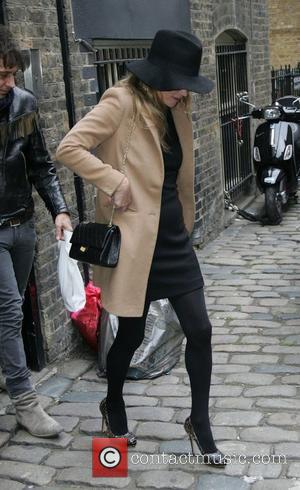 Picture: Kate Moss and Jamie Hince out and about in central London London, England - 02.02.11

Kate Moss' parents have confirmed the British supermodel is engaged to marry her rocker boyfriend Jamie Hince and revealed the couple has already set a date for the wedding.
The catwalk star, who has previously dated actor Johnny Depp and musician Pete Doherty, was rumoured to have become engaged to Hince earlier this week (beg31Jan11).
Moss was photographed wearing a diamond ring on her wedding finger after The Kills star reportedly popped the question at their home in London on Tuesday night (01Feb11).
The model's parents have now confirmed the impending nuptials, with her father, Peter, revealing Hince sought his permission before asking for his daughter's hand in marriage.
He tells Britain's Daily Mail, "I am absolutely delighted, I'm over the moon. Kate rang me on Wednesday to tell me the news and she sounded so happy. They have already set a date for the wedding and it will be at the end of the summer.
"Jamie did do the honourable thing and spoke to me first to ask my permission to have Kate's hand in marriage. That's something that I really admired and it made me very happy. He wasn't nervous about speaking to me, because he knows that I like him and I'm very fond of him. There was no question of me saying no."
Meanwhile, Moss' mother, Linda, who is divorced from Peter, adds, "Kate sounded so excited when she told me that they were engaged. It's been a long time coming. I'm just overjoyed. Everyone is looking forward to the wedding."