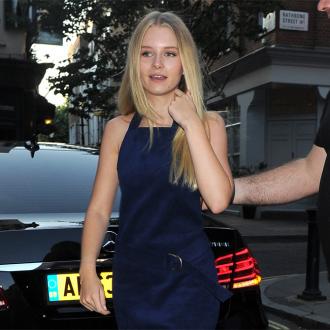 Lottie - who is the half-sibling of the iconic supermodel - walked for Sonia Rykiel at the designer's show at Paris Fashion Week on Monday night (09.03.15).

The teenage model was joined on the catwalk by Sir Mick Jagger's daughters Georgia May Jagger and Lizzy Jagger as well as Lottie's friend Ella Richards - the daughter of Rolling Stones guitarist Keith Richards and Anita Pallenberg - who was making just her second catwalk appearance.

The pretty blonde was styled in a velvet paisley print short-play suit and ankle boots for her turn and oozed cool as strutted her stuff.

Lottie was signed by Storm Models agency when she turned 16 and has appeared in shoots for magazine Teen Vogue and Dazed and Confused and also shot campaigns for Red Valentino and Calvin Klein.

She was first spotted when she was a bridesmaid at Kate's wedding to rocker Jamie Hince in 2011 due to her resemblance to her half-sister.

The two models share a father, Peter Moss, who divorced Kate's mother Linda in 1987 when Kate was 13.

Lottie previously credited Kate, 41, for inspiring her to follow in her modelling footsteps.

The young starlet said: ''It kind of runs in the family. Kate was a massive part of why I started.''