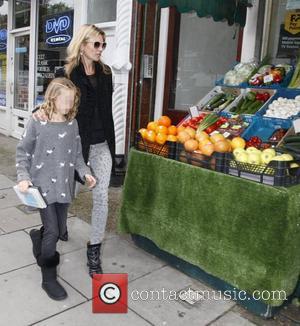 Picture: Kate Moss shopping for a DVD and popcorn with her daughter Lila London, England - 23.10.12

Supermodel Kate Moss has shut down ongoing rumours she suffered with an eating disorder during her runway days, insisting hard work kept her thin.

The style icon and former face of Calvin Klein has always flaunted a slim figure, even after becoming a mum to daughter Lila Grace a decade ago, leading many critics to believe Moss kept her weight in check by dabbling with anorexia.

However, the 38 year old has now set the record straight, admitting she would have been dropped from her job if she began relying on drastic measures to stay skinny.

She tells Vanity Fair magazine, "You'd get to work in the morning, there was no food. Nobody took you out for lunch when I started... but I was never anorexic.

"They (fashion bosses) knew it wasn't true - otherwise I wouldn't be able to work. I was thin, but that's because I was doing shows, working really hard."

Moss has also blasted reports she took drugs to stay thin at the height of her modelling career: "I had never even taken heroin - it was nothing to do with me at all."