Kate Moss is making preparations for her and fiance Jamie Hince to have a baby together after they are married at the end of the summer. 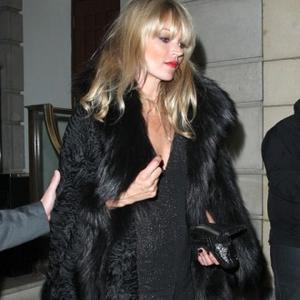 Kate Moss is planning to have a baby with fiance Jamie Hince.

The 37-year-old supermodel - who became engaged to The Kills rocker earlier this week when he proposed to her in bed - has reportedly had plans drawn up for a nursery to be built in her house to accommodate a sibling for eight-year-old Lila Grace, her daughter with publisher Jefferson Hack.

A source said: "Jamie and Kate are on Cloud Nine at the moment. Now they have made the commitment to each other, the next step is a family. Jamie has been brilliant Kate's daughter Lila, which has made her broody for another child.

"He's genuinely devoted to Lila and that's one of the main reasons she's getting married."

Lila was one of the first people to know about the marriage, and she is said to be ecstatic about the news.

The source added to The Sun newspaper: "The first person Kate told of the engagement was Lila, who ran around the house punching the air. They would love a child of their own."

Meanwhile, Kate's father Peter - who is divorced from the British beauty's mother Linda - has revealed 40-year-old Jamie approached him to ask permission for his daughter's hand in marriage and confirmed the couple have set a wedding date.

He said: "I am absolutely delighted. I'm over the moon. Kate rang me on Wednesday (02.02.11) to tell me the news and she sounded so happy. They have already set a date for the wedding and it will be at the end of the summer.

"Jamie did the honourable thing and spoke to me first to ask my permission to have Kate's hand in marriage. That's something that I really admired and it made me very happy."

It is expected Lila Grace will be the chief bridesmaid at the ceremony.