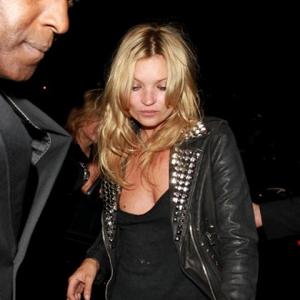 Kate Moss lost her £14,000 engagement ring while partying at the Glastonbury Festival.

The supermodel - who was watching fiance Jamie Hince perform with his band The Kills at the music event in Somerset, South West England - was said to be "hyperventilating" after realising she had mislaid the sparkler in the mud.

An insider explained: "Everyone was looking for The Ring, with Kate practically hyperventilating at the side of the stage. She was screeching at her mates, begging them to get down on their hands and knees , and trawl through the mud for the sparkler.

"Even Kate was half-heartedly flicking mud around with her welly, trying to unearth the ring."

However, much to her amusement, Kate - who is due to tie the knot with Jamie this Friday (01.07.11) in Oxfordshire, South East England - eventually found the ring stuck in the bottom of her handbag amongst some tissue.

The source added to the Daily Mirror newspaper: "Two hours later, and still crying, she went to the loo only to root through her bag for a tissue and magically find the ring. It had been there the whole time.

"Kate was cackling hysterically but no one else found it quite so funny."

The couple are reportedly planning "festival-style" nuptials, with rumoured performances from the likes of Snoop Dogg and Gossip frontwoman Beth Ditto.