Kate Moss has hired a team of transvestites to chaperone guests at her wedding to The Kills rocker Jamie Hince on Friday (01.07.11). 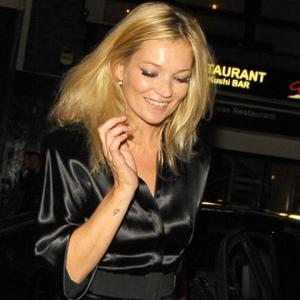 Kate Moss has reportedly hired a team of transvestites to chaperone guests at her wedding.

The supermodel - who is set to tie the knot with The Kills frontman Jamie Hince in Oxfordshire, South East England, on Friday (01.07.11) - has also enlisted the services of naked men who will be adorned with fake tattoos of the couple's faces on their chest.

One guest revealed: "Kate has hired a small team of transvestites to chaperone guests to the toilets and back to their seats. Most of them will be 6ft 5ins in their heels.

"She's also having naked musclemen with fake tattoos on their backs and chests of Kate and Jamie's names and faces.

"Kate's hoping guests will have pictures with them."

The couple have also arranged for some unusual acts to entertain their guests during the reception, including a dancer, trapeze artist and a group of pipers.

The source added to the Daily Star newspaper: "There will also be a huge champagne glass set up in the grounds with a naked woman dancing in Pink smoke.

"Finally there is an incredible trapeze artist who will strip as she does her act and Scottish pipers who'll play as guests are shown to their dinner seats."

The 37-year-old supermodel has also organised a box of dressing up clothes, including moustaches, hats and wigs, to be delivered to her wedding for guests to wear.

Kate - who is famed for her partying ways - and Jamie recently sent attendees a gift list that included 14 crystal ashtrays which cost £240 each and crates of 2002 Louis Roederer Cristal champagne at £1,833 each.

Among the less-expensive items, the couple also asked for a rabbit-shaped jelly mould for £35 and a pair of tea strainers at £12.95.