Kate Moss And Jamie Hince 'To Try For A Baby'

Kate Moss and Jamie Hince are reportedly set to start trying for a baby now that renovations have been completed on their new London home. 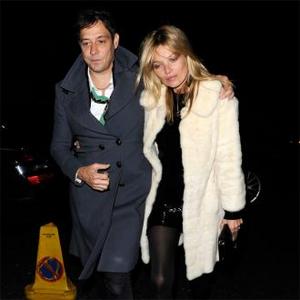 Kate Moss and Jamie Hince are reportedly set to start trying for a baby.

The couple - who tied the knot at Kate's country mansion in July 2011 - apparently wanted to wait to move into their new home in London's Highgate before trying to get pregnant.

But with renovations completed and the move imminent, the 38-year-old supermodel is said to have bought Jamie a ''lucky'' white gold bracelet to mark nine months of marriage and the start of their baby-making attempts.

A source told the Daily Star newspaper: ''Kate can't wait for them to move into their new house and start the next chapter of their lives.

''They're planning to have a child once they've settled in so she wanted to surprise Jamie with a gift to make it extra special.

''Nine is Jamie's lucky number, so it seemed the perfect thing to do. Jamie ruined her surprise because he saw the package among all the packed boxes of their stuff and insisted she told him what it was.

''Kate gave in and gave it to him early and he loves it. He started wearing it straight away.

''They didn't want Kate to fall pregnant until they were in and settled so they're both really excited that the move is finally happening.''

Kate - who already has nine-year-old daughter Lila Grace with ex-boyfriend Jefferson Hack - is believed to have had a ballet studio and private gym fitted at the £8million property which she bought last August.