The Kills frontman Jamie Hince - who is engaged to Kate Moss - has admitted his love of smoking determines the places where he goes out. 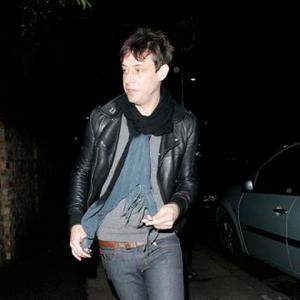 Kate Moss' fiance only socialises in places where he can smoke.

The Kills frontman Jamie Hince doesn't worry about the UK ban on smoking cigarettes in public places as he always goes out to venues where they don't mind if he lights up.

Asked how he copes with the smoking ban, he said: "I tend to go to the sort of places where they let you smoke anyway, so it's not really a problem for me."

Both Kate and Jamie are famous for their love of smoking and it has previously been claimed that the supermodel insists on having 100 cigarettes nearby at all times.

A source said: "Kate has five coffee tables spread between her living room, kitchen, office and bedroom so that's a lot of cigarettes.

"She also has a special tennis ball with holes for cigarettes to stick out from so visitors can relax with a smoke."

It was also claimed she insisted upmarket London department store Selfridges installed a special smoking area for her when she launched a range of handbags there.

A source said: "It's Kate Moss - she can ask for what she likes and they'll probably bend over and give it to her.

"The outside area is a bit of a problem. Her people want couches, cushions, tables, heaters and candles to make it comfy for her to have a cigarette."