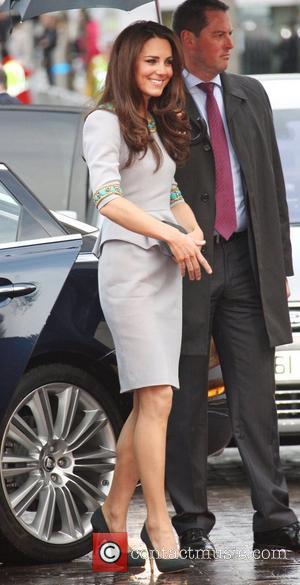 Kate Middleton's dress that she wore to a private function at Claridge's Hotel in Mayfair this week, has caused a stir online. The stunning cream Roland Mouret gown -which featured a thigh-high slit - was teamed with a pair of shimmering Jimmy Choos, reports the Huffington Post.

The Duchess surprised everyone with the unexpected outing, arriving with Prince William for an evening hosted by the Thirty Club - an elite group of media individuals. A royal source told the UK's Daily Express, "[The prince]'s been invited for about the last nine years but thought it right to accept the invitation this year as he has this personal landmark [his 30th birthday] coming up and it is such a landmark year for the Royal Family in general". While William wore his typical double-breasted tuxedo, Kate stunned in the high-necked gown, which recalled Diane Kruger's 2010 Met Gala gown by Calvin Klein. The same dress has reportedly also been donned by France's former First lady Carla Bruni, as well as the supermodel Amber Valletta, though Mouret told Grazia he was delighted Middleton had resurrected his creation, saying, "I am absolutely delighted that The Duchess of Cambridge chose to wear my Lombard gown to the Thirty Club annual dinner... The Duchess has an elegance and timeless beauty that is a breath of fresh air, it is an honour to be part of her journey".

Others attending the dinner in London included GARY LINEKAR and his wife DANIELLE LINEKAR, and the businesswoman KARREN BRADY.