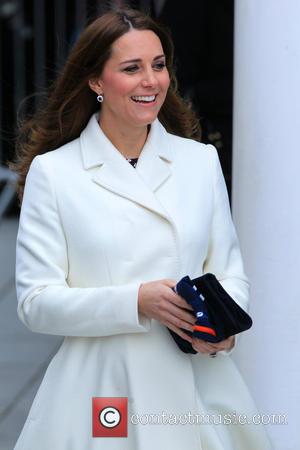 Picture: A heavily pregnant Kate Middleton The Duchess of Cambridge was photographed as she arrived at a reception at the Spinnaker Tower in Portsmouth, United Kingdom...

Pregnant British royal Catherine, Duchess of Cambridge has called for an end to the stigma surrounding mental health issues as she launched a week-long awareness campaign.

The Duchess has recorded a video message on behalf of bosses of charity Place2Be, who have launched the U.K.'s first Children's Mental Health Week, which begins on Monday (16Feb15).

Speaking from a school in South London, the royal says, "The challenges facing children in the U.K. today can often feel overwhelming. Both (Prince) William and I have seen that many young people are struggling to cope with the impact of bullying, bereavement, domestic violence, family breakdown and more.

"Without support the effects of these challenges can be traumatic, leading to serious issues such as anxiety, depression, addiction and self-harm. The stigma around mental health means many children do not get the help they so badly need. This needs to change.

"We need to help young people and their parents understand that it is not a sign of weakness to ask for help. A child's mental health is just as important as their physical health and deserves the same quality of support."

The Duchess, a patron of Place2Be, is expecting her second child.