Kate Hudson is 'too busy' to get married

Kate Hudson is 'too busy' to plan her wedding with fiancé Matthew Bellamy but they are in no rush to be married. 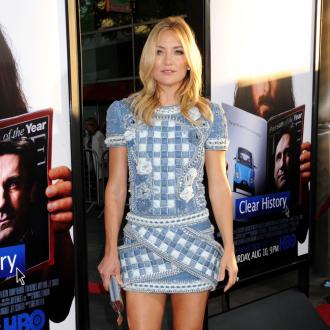 Kate Hudson is ''too busy'' to plan her wedding.

The 'Bride Wars' star, who was raised by her mother, Goldie Hawn, and the 68-year-old actress' partner, Kurt Russell, got engaged to Muse frontman Matthew Bellamy in April 2011 but the couple are in no rush to tie the knot.

Asked if they were planning a big wedding, the 34-year-old actress told 'Live with Kelly & Michael' in New York City on Tuesday (28.01.14): ''No, I'm planning nothing right now. I'm so busy, we've been so busy and it's been great. I come from an unconventional family -- they're not married, my parents aren't married.

The blonde beauty currently has her hands full raising her sons, Ryder, whose father is Kate's ex-husband Chris Robinson, and Bing with Matthew, 35, as well as her Fabletics line of exercise clothing.