Actress Kate Hudson set the tone for the rest of the 69th Venice Film Festival in a stunning Versace gown. 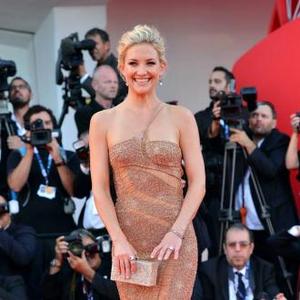 The 33-year-old actress stunned in a glittering floor-length Versace gown and Faberge jewellery as she walked the red carpet at the premiere of 'The Reluctant Fundamentalist' with her fiance, Muse frontman Matthew Bellamy.

The couple - who have 14-month-old son Bingham together - shared a kiss for the cameras as they celebrated Kate's leading lady role as the film's main love interest, a photographer named Erica.

Matt wore a tuxedo and round sunglasses as he posed with the 'Almost Famous' actress, whose elegant Pink dress with subtle cut-out panels was a hit with The Fashion critics.

The film - based on Mohsin Hamid's novel of the same name - tells the story of a Pakistani businessman who shuns the US and returns to his homeland after the events of 9/11.

Fellow blonde bombshell Naomi Watts joined Kate on the red carpet to accompany her partner Liev Schreiber, who has a starring role in the drama.

'The Reluctant Fundamentalist' opened the 69th Venice Film Festival, which has faced criticism this year over the relatively small number of stars attending after the number of film screenings was cut.

Kate can next be seen as a guest star on hit musical TV show 'Glee'.