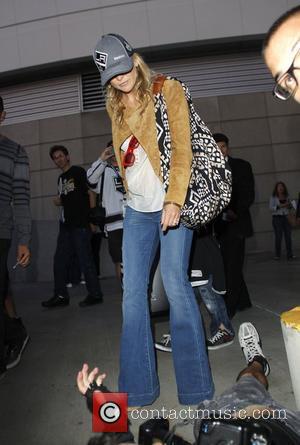 Picture: Kate Hudson checks that a photographer is okay, after he tripped over backwards while taking her picture Arrivals for the LA Kings ice hockey...

Kate Hudson and Matt Bellamy shared a tender moment on the red carpet at the premier of the actresses' new film, The Reluctant Fundamentalist, reports US Weekly.
The film's premier also marked the opening for the 69th Venice Film festival, which, after much anticipation, kicked off yesterday. Hudson and Bellamy couldn't contain their excitement, and shared an intimate kiss before posing for pics and hanging out with their celebrity pals. The pair have been engaged since April 2011, and have a 14-month-old son together, called Bingham. Hudson, who won the Academy Award for Best Supporting Actress for her role in Almost Famous,, was quick to mingle, and was snapped chatting to Naomi Watts at the star studded affair. Bellamy, who recently revealed his hand in delivering young Bingham, is fresh from a thunderous performance at the Olympics closing ceremony, where he and his band, Muse premiered a new song written especially for the occasion.
Elsewhere at the Venice film fest, Paul Thomas Anderson's highly anticipated The Master will also show off its impressive ensemble, including Joaquin Phoenix, Philip Seymour Hoffman and Amy Adams. The film is hotly tipped to pick up numerous Oscars, and is perhaps the most talked about film in the run up to awards season. The festival runs through until September 8th.