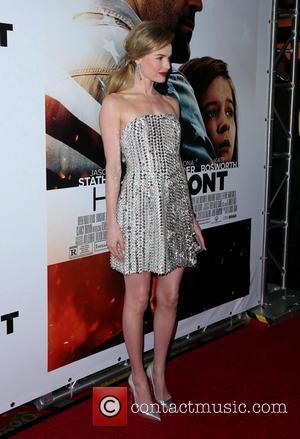 The Hollywood couple tied the knot at the picturesque Ranch at Rock Creek in Philipsburg, Montana in August (13), and now romantic snapshots from their special have been published.

A team from Martha Stewart Weddings collaborated with the couple to create a four-day dream wedding weekend, which included everything from the ceremony and reception to planning activities for guests, including hiking, horseback riding and fly fishing.

Recalling her special day miles away from Hollywood, Bosworth explains, "I've been a horse rider my whole life and have always been attracted to those wide-open spaces and the big sky."

On the big day, Bosworth arrived for the mountaintop nuptials in a horse-drawn carriage, before she and Polish exchanged self-written vows before guests including the groom's 15-year-old daughter, Jasper, and actress Lake Bell.

Filmmaker Polish took a moment to capture a rare shot of his new bride with his own camera and the candid shot was picked as the cover photo for the Martha Stewart Weddings magazine.