Kate Bosworth has shown off her singing skills in her debut advertisement for high street retailer Topshop. 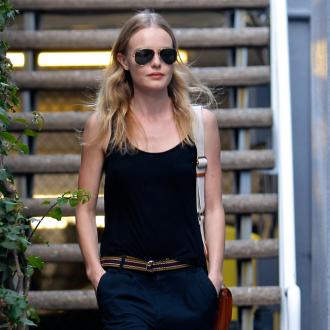 Kate Bosworth has been unveiled as the new face of Topshop.

The 29-year-old actress - who performs a version of 'Winter Wonderland' in the advert - teamed up with her filmmaker fiance Michael Polish to work on the promotional film and was delighted to get involved in the campaign for the high street chain.

She said: ''This project brings together two important aspects of my life: cinema and fashion. I have always been a fan of the Topshop brand and it has been an honour to work with Sir Phillip and the team. I hope everyone enjoys watching it as much as we did making it.''

In the days leading up to the unveiling of the advert, a series of still images were released, though the actress was not easily identifiable.

The advert was inspired by the famous piano scene with Michelle Pfeiffer from 'The Fabulous Baker Boys'.

Kate enjoyed working on the advert because it meant she had the chance to go shopping in London.

She told the Evening Standard newspaper: ''I think London and California differ mostly because they are so dictated by the weather. California is always sunny so it assumes a laid-back surfer vibe. I can find myself wearing shorts and a tank top at Christmas. The individual expression in London fashion is fantastic. I visited Portobello market this trip and picked up a few great treasures.