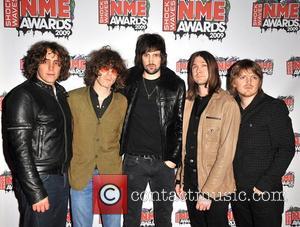 Kasabian guitarist Serge Pizzorno counts himself a very lucky rock star after recording a collaboration with Sin City actress Rosario Dawson for the band's new album.
The British musician was ecstatic after persuading the Hollywood beauty to sing with the group, but faced a dilemma when he realised he had no idea about her vocal ability.
But Pizzorno was left speechless when Dawson recorded track West Rider Silver Bullet for their forthcoming LP perfectly in just two takes.
Pizzorno says, "I flew out to Los Angeles for her vocal session. I was nervous, thinking that if she couldn't sing, we'd be screwed. I had my fingers crossed.
"She came in and looked really beautiful, sat there. Then, she hit the first note and I knew we were going to be all right. She did it in two takes and I was there half an hour. Then she had to go because she was filming with Will Smith. I thought, 'My whole life has gone pretty weird'.
"Getting a Hollywood actress to do it was quite wild and it is a beautiful song. I was blown away."