Kasabian have announced they will embark on an arena tour after closing this year's Glastonbury festival on Sunday night (29.06.14). 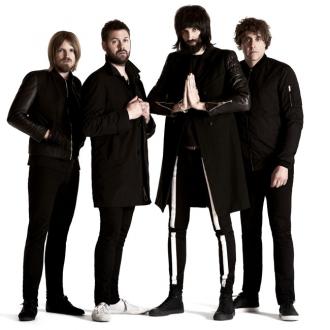 The rockers - who had the honour of closing this year's Glastonbury festival on sunday night (29.06.14) - are set to embark on an arena tour of the UK and Ireland this November - including a five-night stint at the O2 Brixton academy.

The tour is sure to be a hit after the four-piece band secured their fourth consecutive number one album '48.13' this year and played a homecoming show at Leicester's Victoria Park to a crowd of 50,000 fans.

He said during the performance: ''Ten years ago we opened The Other Stage - we'd been up all night of course. Seriously, thank you for this.''

Kasabian performed fan favourites like 'Shoot The Runner', which featured a sample of Kanye West's 'Black Skinhead' and 'Processed Beats', while at another point, guitarist Serge Pizzorno performed a bluesy cover of Gnarls Barkley's 'Crazy' with just a guitar and a trumpet, while Tom left the stage for a break.

The 50,000-strong crowd were treated to a surprise appearance from 'Mighty Boosh' joker Noel Fielding during 'Vlad The Impaler'.

Dressed in a turban with blood streaked across his face, Noel bounded across the stage in a cape as Tom chanted ''Bobby Womack see you on the other side'', a tribute to the legendary soul singer who passed away on Friday (27.06.14).

Kasabian finished their stellar set with a cover of Fatboy Slim's 'Praise You' and 'L.S.F'.

The full tour dates are: