Kasabian couldn't turn down performing at London's Hard Rock Calling festival and were ''blown away'' by the opportunity to join the killer line-up. 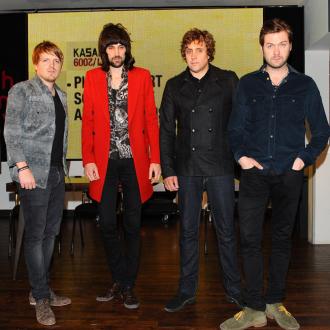 Kasabian were ''blown away'' by their Hard Rock Calling gig.

The indie rockers were thrilled to be invited to headline the music festival at London's Queen Elizabeth Olympic Park yesterday (29.06.13), where they treated the crowd to some of their biggest hits including 'Empire' and 'Shoot The Runner'.

Speaking to Absolute Radio's Pete Donaldson and Sarah Champion in the Hard Rock VIP area, guitarist Sergio 'Serge' Pizzorno said: ''We're blown away by it. When we were asked to do it we were preparing to take a year off but we couldn't turn down Hard Rock and the Olympic Park.

The 'Fire' hitmakers were joined by the likes of Paul Weller, Klaxons, and The Cribs on stage at the venue and were particularly impressed with fellow act Miles Kane's performance.

Serge said: ''Miles killed it the crowd were insane. He's a beautiful man - just as a human being he's very special.''

The British band are now planning a relaxing summer and Serge joked he would be spending his free time tending to his precious allotment garden.

The musician revealed: ''I like getting home for about 2 weeks and then go back in the studio and start working.

''I'm always in the studio at home and also looking after the allotment, you know, watching out for the runner beans and tomatoes.''

Bruce Springsteen and the E Street Band are headlining the festival tonight (30.06.13), with Deaf Havana and Passenger also performing.

Listen back to Festival highlights including live performances from Kasabian, Paul Weller, Miles Kane and more plus watch exclusive interviews at www.absoluteradio.co.uk/live.