Kasabian's Tom Meighan is a hands-on father and is not afraid to change little daughter Mimi Malone's dirty nappies. 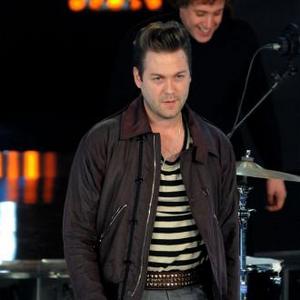 Kasabian's Tom Meighan is spending most of his time changing dirty nappies since becoming a dad.

The Kasabian frontman and his girlfriend Kim welcomed their daughter Mimi Malone into the world in May and the wild rocker has not been afraid to roll his sleeves up and get stuck in when it comes to his dad duties.

His friend Stephen Graham insists Tom - whose bandmate Serge Pizzorno has a two-year-old son Ennio - will be a great parent because he's just as excitable as young kids.

The 'This Is England' actor said: ''I sent Tom a text the other day to see how he's getting on, and he's embraced it. Serge says he's like a different man already, he's got stuck in and he's changing nappies and all that like all good men should. I think people will be amazed when they see him next.

''But I know he'll be great with his kid because he's got so much energy anyway. He'll be a fantastic father.''

Stephen became friends with Tom and Serge after working with them on sitcom 'Walk Like A Panther', which is inspired by 70s and 80s British wrestling.

The 'Pirates Of The Caribbean: On Stranger Tides' star has revealed the comedy will not be hitting TV screens after a number of broadcasters decided the series was too risquÃ©.

However, the project is not dead and is instead being made into a film with Tom still appearing, Serge writing the soundtrack and shooting is due to start next January.

Stephen, 39, added to BANG Showbiz: ''We're going to make a film of it now instead. We get rejected by a lot of TV companies who said it was too on the nail and a bit depressing. But I thought it was hilarious.

''It's going to be the same cast in the film, we're just raising the money now. If all goes well we'll start filming it in January. Tom's still involved, he's got his own character, and Serge is going to do the soundtrack.''