Review of Empire Album by Kasabian 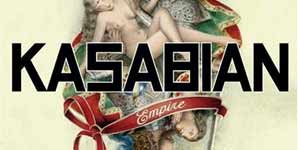 After all the obnoxious self-promotion and unjustifiable hype from Tom, Serge and co, I probably wasn't alone in really wanting this to be a terrible record. But, unfortunately, Kasabian have proven that they can walk the walk as well as talk the talk.

2004's self titled debut was a patchy affair to say the least, the ballsy, but ultimately Primal Scream-lite singles sat awkwardly next to proggy synth washes (i.e. filler), leaving you with the impression of a rushed album with only a few flashes of brilliance. Serge Pizzorno himself has since labelled it "sketchy nonsense."

But Empire is a triumph from start to finish (almost), and is the sound of a band finally finding their niche, with most tracks sporting a druggy,
psychedelic electricity, sounding a bit like The Chemical Brothers sneaking
into a Brundle telepod with T-Rex.

"Sun/Rise/Light/Flies" is a euphoric epic, bursting with thunderous guitar noise and majestic strings, and new single "Shoot The Runner" is a perfect reconciliation of the dance and rock aspects of their sound, and catches them in leaner and more ferocious form than ever.

There are a couple of tracks on here that just shouldn't work, "Me Plus One", with its Eastern orchestration, psychedelic arrangements and thinly veiled drug references is pure Beatles pastiche, and "Apnoea" is a consummate rehash of Primal Scream's XTRMNTR era. They only get away with it by injecting maximum energy and enthusiasm, something their first record didn't really have.

The back-to-back trio of "By My Side", "Stuntman" and "Seek And Destroy" get by in a similar way, the electro hinted at two years ago is explored further and from so many different angles, and again, with much more verve. Also, the way these acid drenched mash-ups fit so well together helps turn a good album into a great one.

This blip is swiftly forgotten when "The Doberman" kicks in though. It's a hypnotic whirl of noise that takes on chilling choir sounds and funereal mariachi trumpets to create one of the most ambitious and impressive album closers you'll hear all year. An amazing end to a surprisingly great album.

A great man once said "don't believe the hype", and for the most part, he's right, but there's an exception to every rule, and Empire is it. Of course it's not as quite good as they say it is, but it's closer than they've ever got before. Their arrogance is a bit more tolerable now they can back it up.