Review of Empire Single by Kasabian 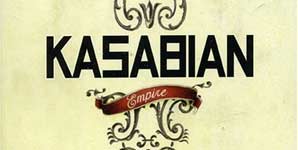 Since the pre-release began for Kasabian's new material, we've been able to take a peek at their live reinvention, which, quite conveniently is reviewed on this very site, see them at V, and subject the band to the most feared, revered and inexplicably brilliant media experience around - the Contact Music interview.

As for the new single 'Empire', which has received recognisably more radio play than its predecessors, it is not an overly impressive track but Kasabian remain true to what they're good at to start the next chapter in their careers. Those ritualistic undertones that bound the mood of their debut are carried through to a large extent, and it is once again the vocal melody the band rely on to provide that shot of adrenaline and aggression. "Stop! It's happening again" is successfully blunt; suitably insistent and forceful, but for the band boasting their new album will be as groundbreaking to Britain as 'Definitely Maybe', its lead single is really not poised as a platform for revolution or indeed.Empire.