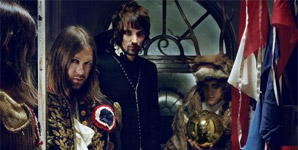 Kasabian are a funny animal, back in 2005 they exploded onto the scene with their amazing self titled album, that had anthems such as 'Club Foot' 'Reason For Treason' and 'L.S.F'. However this branded Kasabian as the next Oasis which sadly their second album couldn't live up to the expectation. Now the band return with their third studio album 'West Ryder Pauper Lunatic Asylum', stating 'Don't brand us as Lad Rock'

The question on the lips of all of Kasbian's fans is: will 'West Ryder Pauper Lunatic Asylum' be lucky number three to come from the boys from Leeeessssssstttttteeeeererrrrrr???

They gave fans a sneak preview but not in the normal way, 'Underdog' the opening track was on a Sony advert starring new Real Madrid striker Ka Ka. What more can you ask for, for promoting your music. The thing is 'Underdog' is a step back four years and sounds like the early sounds of Kasabian, when the group were labelled 'Lad Rock'. 'Fast Fuse' does exactly what it says on the tin, it explodes into action and this is the perfect opportunity for Tom Meighan to show that he is back on top form.

Then it seems that the boys step into a space anomaly because it seems that Kasabian are now under the influence of George Harrison/Beatles with their new psychedelic sound in the shape of 'Take Aim' and when you first hear this, you do think what the f**k, but actually it does work.

The Pick n Mix of this album continues with 'Thick As Thieves' which gives you that fairground feel and all you need is Tom Meighan to wear a tall top hat and the picture is complete, although the final part of the puzzle is the backing drawl (ok vocals) of Serge Pizzorno.

Obviously the stand out track on the album is 'Fire' which does bring you back four years to their debut album. This has Fire (excuse the pun), energy, life and is a typically sounding high quality Kasabian tune. This has been pinned right near the back of the album and probably should have been the ending track. This would leave you wanting more without a doubt.

The only criticism is that the album could have been cut down to ten tracks and would have made more of an impact and maybe leaving you wanting more. Certainly 'Ladies And Gentleman' and 'Happiness' could of quite easily been left of the album completely and not been missed.

At the end of the day Kasabian's second album was poor and in the shape of 'West Ryder Lunatic Asylum' it seems like they have returned to their roots and tweaked it a bit. Whether they intended this or not it doesn't matter, but at the end of the day Kasabian should stick to what they are good at - 'Lad Rock' mixed with electronic beats - you can't help your following just embrace it and get on with it.