Review of Velociraptor! Album by Kasabian

With Oasis permanently dismissed, dismantled and divided into smaller segments, Kasabian are surely destined to be the pinnacle of rock and indie. 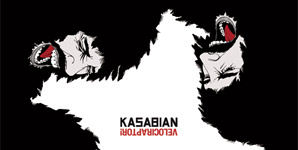 After the release of their fourth studio album, 'Velociraptor!' the band surely now have their sights set on a dominating the industry. After all, are there really that many predators willing to challenge this vicious carnivore?

Serge Pizzorno claims "it's been 15 or 16 years since the last classic album, but I think we've done it".

A bold statement, but this ostentatious behaviour is exactly the type of dynamism and psyche that we should expect from the guys. To speak derogatory of their music would be blasphemous, and like the jeans their music fits into, the boys from Leicester are not afraid to say anything, (like ripping into the avid fans of U2 after just supporting them on a two-year record-breaking world tour).

This is what the genre demands, and if they are ever looking to take over from Oasis, it will be this calibre of statement that gets you there.

Anyways, like the dinosaur the album is depicted after, Velociraptor! ripped apart all of its enemies and dominated the charts going straight in at number one, making a mockery of Ed Sheeran by almost doubling the amount of albums he sold in one week.

However, the album fails meet the indie/rock standard set by its predecessor, The West Rider Pauper Lunatic Asylum, and those who were looking for something similar maybe disconcerted.

This isn't to say the album is a failure because it most certainly is not! It is much lighter than most conventional Kasabian music and at first appears almost like a fat free version of mayonnaise when all you really wanted was the real thing.

Nonetheless, after a few listens, the tracks begin to separate themselves and soon you will begin to wonder what the hell was wrong with my initial reaction.

The brass beginning to the album is meant to grab your attention, and once it is gone, lead singer Tom Meighan sings through a pop song that sounds like Alex Turner, while 'Days are Forgotten' is a much lighter tune than we expect from the band but still has a funky drum beat to it.

'La Fee Verte' is an extremely slow tune with depressing lyrics. Although that description may sound like you want to slit your wrists, Tom's voice, accompanied by some breaks and bass lines works adequately.

'Velociraptor!' follows and completely contrasts to the former. It's high paced, louder but not booming and evidently must be the festival song from the album with its easily repeated chorus.

With so much commercial success from West Rider.... and especially from the single 'Fire', it is no doubt the band wanted something similar from this album. 'Re-wired' is most definitely that track, with its 90's disco beat, numerous breaks and drops, it is ready to be overplayed by BBC Radio 1.

The album ends on another soothing tone and many fans maybe asking where the rock and roll has gone. Nonetheless, 'Neon Noon' is fitting for everyone who needs something relaxing after a long hard day or exhausting night out, it's just a shame the tracks prior to it aren't tiring and energetic to require it!

The question everyone is asking though, will they succeed in replacing Oasis? Only time will tell, but judging by their first four albums, they have already managed to change the music they make and apply it to the decade they find themselves in and not just repeat the same formula over and over. They have added more elements to the equation and are reaping the rewards. The band grow and evolve through the every album, and despite constant juxtapositions to Oasis, due to their public companionship with them, they are not Oasis. They mix it up! Whether it changes people's lives like they claimed it would is another story though!
3.5/5