Never backward in proclaiming their own worth, it's safe to say that Kasabian have always had an aura about them. From their early days as vaguely trip-hop based act Saracuse, they always envisioned that one day they would bring the world to their hometown and on Saturday 21st June 2014, they did. A decade on from the release of their eponymous debut album and on the back of their fourth UK number one album ('48:13'), the Leicester-based quartet have achieved most of their musical ambitions but that day was one they will never forget. 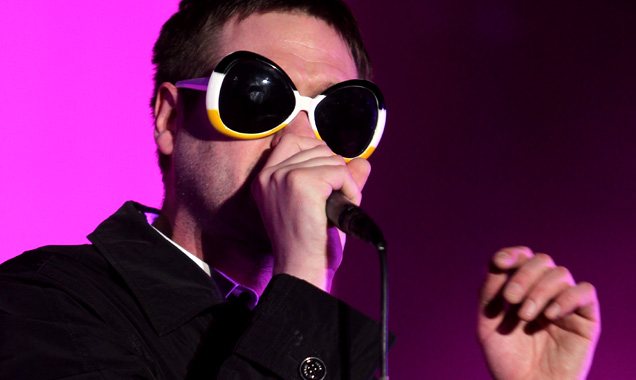 In interviews before the show, Sergio Pizzorno had eluded to the fact that the day could've been their "Spike Island" or "Knebworth". Yes, not on the same scale, but nevertheless that's how it felt. The scene was set early as the queues started forming around Victoria Park from late morning. The feeling in the air was so palpable, you could cut the excitement with a knife. As a site, Victoria Park has not hosted many events, the last one on this scale being Radio 1's "One Big Weekend", but it's well designed and surprisingly easy to navigate.

The warm up acts were not what you would expect from a self-picked Kasabian show. The three youthful looking members of Aussie based indie-dance upstarts Jagwar Ma strode out on stage like they belonged, all donning "Bucket Hats" and baggy clothing reminiscent of early Roses (Stone) fans, and preceded into a set of tunes that got the crowd limbered up, without anyone over exerting themselves. Next up was Rudimental, who would not have been the fans' choice to support that is for sure. But, as the duo jumped from hit to hit, it was clear to see why they were there. The entire crowd, (of those under 30), were bouncing along knowing every word and, all in all, they got the place pumped.

As Rudimental left the stage, the lights went down. The crowds surged to get their last beers and take that tactical urination.  A soft white glow covered the stage and, in one moment, the whole place was lit up by a vibrant shade of neon pink. The numbers 48:13:00 appeared in massive characters on the huge screens for a second, then the countdown began in earnest. They even managed to slip in album teaser 'Malted Milk' and reprises 'Shiva' and 'Mortis' during the countdown, but how many people picked up on this is to be debated.

Accompanied on stage by a couple of backing singers and a rather fetching set of female string musicians all decked out in Serge's "Skeleton Outfits", Kasabian began by blasting straight into '48:13' album opener 'Bumblebee' and the place erupted; there were teenagers, students, mods, rockers and even senior citizens in this field singing every word, feeling every key change.

After rattling through all-time favourites 'Shoot The Runner' and 'Underdog', Tom stood at the front of the stage for one of the few-and-far-between moments of audience interaction.

A slightly accelerated version of 'Fast Fuse' led brilliantly into the more melodic tones of 'Days are Forgotten' which, to this day, I believe is a Bond Theme in waiting. This was just preparation for what was in no doubt the song that Kasabian gave Leicester; 'Eez-Eh' was always going to be an anthem in these parts, and that day was the day this song was written for. The crowd went absolutely nuts, Kasabian went absolutely nuts. I even caught a few members of security jumping along.

The crowd did't let up either as the pulsating vibes of debut single 'Processed Beats' filled the air. They followed that with future single 'Stevie' and, as they ran though the largely electronic tones of 'ID', a brief interlude from the string section started up with 'Doberman', but Tom disappeared from view leaving Serge to lead 'Take Aim'.

When he reappeared, the entire place erupted as the first beats of 'Club Foot' were recognised by one and all. Stand out single from 'Velociraptor!' 'Re-wired' led us into an all electronic based version of 'Treat', which concluded with Serge standing behind his Korg on a 5 minute audio salvo reminiscent  of the happy hardcore era, even doffing his hat to the hugely influential "Fantasia" generation of the early 90s. After a brief respite, all four members brought the main set to a close with all time favourites 'Empire' and 'Fire'.

As they walked off to a rapturous reception, the crowd were going nowhere. Chants of 'Eez-Eh' and 'Less-tah' rang out over the park. The encore opened up with 'Switchblade Smiles' before ploughing through 'Vlad the Impaler' and the all too brief 'Praise You' (courtesy of Fat Boy Slim) introduction to set closer and chant-tastic 'L.S.F'. Upon completion of the set, each of the band members took to the mic to thank everyone in attendance, proving the synergy between Leicester and Kasabian will never diminish.