Karlie Kloss made her catwalk return as she opened the Anthony Vaccarello show at Paris Fashion Week yesterday (28.02.12). 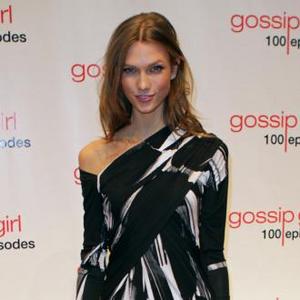 The model - who skipped Milan, London and New York Fashion Week this year - took to the runway for Anthony Vaccarello, where she opened the show, and is set to also walk for Christian Dior, Lanvin and Jean Paul Gaultier.

According to Fashionista.com, Karlie had cancelled all Milan, London and New York Fashion Week appearances this year because she had planned to film a commercial in Japan but it fell through allowing her to take part in Paris Fashion Week.

Karlie was joined on the runway by several other top names including Joan Smalls, Anja Rubik and Arizona Muse, while Kanye West was spotted in The Front row.

However, the 19-year-old Chicago born model admitted recently she was missing New York Fashion Week, tweeting: ''No one is more bummed than me to be missing out on all of the#NYFW fun - sending all my love to NYC! Xx (sic)''

Meanwhile Pauline Hoarau tripped and fell several times in her Giuseppe Zanotti heels during the show before it was closed by Anja in an asymmetric black-and-gold evening gown.