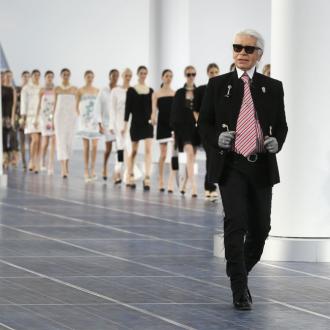 The outspoken Chanel mogul is famed for wearing his trademark dark glasses at all times and is hoping to offer customers the same experience with his new range of stylish frames, which he believes can make even the most unfortunate-looking people attractive.

The video shows creative director Karl get behind camera to shoot the duo and offer a few pearls of wisdom about the benefits of sunglasses.

He declares: ''They balance ugly faces and they make beautiful faces more beautiful.''

The fashion maven also stated selling his glasses, which will retail for about £125 a pair, feels the same as offering clients pieces of his own soul.

Karl adds: ''I wear glasses all the time so it's like selling my soul.''

The star has come under fire in the past for his frank comments about people's looks, including The Duchess of Cambridge's younger sister Pippa Middleton, and singer Adele.

He defended his remarks about Adele's weight earlier this month, claiming he never said she was fat, merely ''a little roundish''.