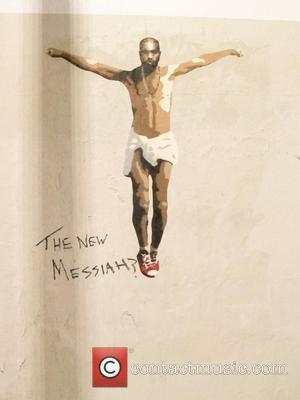 Picture: Kanye west - Kanye West appears to be the inspiration behind a piece of festive street art in Los Angeles. The Easter themed piece appeared...

Former child star Ricky Spicer has sued publishers at Vogue over the use of his voice in a promotional video for Kanye West and Kim Kardashian's controversial magazine cover.

The video features West's song Bound 2, which samples Spicer's vocals, and he claims bosses at the publication did not ask for his permission to use the clip, according to the New York Daily News.

He is now seeking unspecified damages.

A lawsuit filed in Manhattan Supreme Court in New York on Thursday (17Apr14) reads: "Mr. Spicer's voice is used substantially throughout the video, comprising approximately 44 (per cent) of the vocals."

The lawsuit comes four months after Spicer, who sang with The Ponderosa Twins Plus One, aged 12, filed one against West for allegedly ripping off his former group's song Bound.