The unexpected interloper on Kanye's Glastonbury stage has taken to social media to explain his actions - he did it for Taylor Swift!

The stage invader who interrupted Kanye West’s headline set at Glastonbury at the weekend has finally broken his silence. As you probably already know, the perpetrator was English comedian Simon Brodkin, masquerading as his on-stage persona Lee Nelson.

Brodkin, who has wrote and performed in the comedy series ‘Lee Nelson’s Well Good Show for two seasons on BBC Three from 2010 to 2011, took to Twitter to post a picture of himself wearing a self-made ‘Lee-zus’ T-shirt and holding a fake microphone, standing next to a slightly perturbed Kanye during ‘Black Skinhead’.

This all went on for fewer than 10 seconds, before Brodkin was quickly intercepted by a security guard and dragged from the stage. While Kanye took it in his stride, he was distracted enough to quickly re-start the song before moving on. 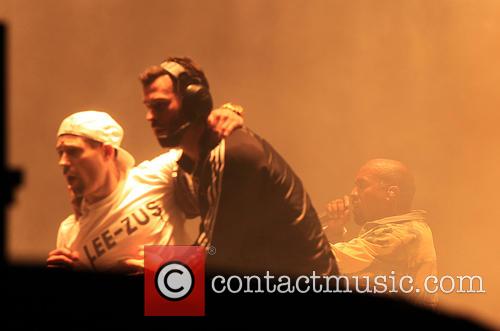 Nelson being dragged from the Glastonbury stage during Kanye's set

Brodkin also explained himself, saying that he rushed the stage “for Taylor Swift”. This is a reference to Kanye’s notorious interruption of Swift’s acceptance speech at the 2009 VMAs, when he got onstage and insisted that Tay hand her trophy to Beyonce instead. “I Kanye’d Kanye,” Brodkin wrote.

Swift, of course, performed a headline set on the same Saturday night in London’s Hyde Park for the British Summertime series of festivals. The two have long since put that 2009 incident behind them, with Swift hinting at the possibility of a future musical collaboration, but Kanye attempted a similar stunt during this Grammy Awards earlier this year, when he insisted that Album of the Year winner Beck did not “respect artistry”. For which he has since climbed down and apologised.

As for Brodkin, he has previous form for photo-bombing big occasions and evading security. In 2013, he took to the pitch at the Premier League football fixture between Everton and Manchester City during the pre-match warm-up, in an attempt to exercise alongside the City stars. Last year, he also got arrested for evading airport security to have his photo taken alongside the England team as they boarded their plane to the World Cup in Brazil.

More: Kanye West’s entourage at Glastonbury so large that other bands had to cut their guestlist spots