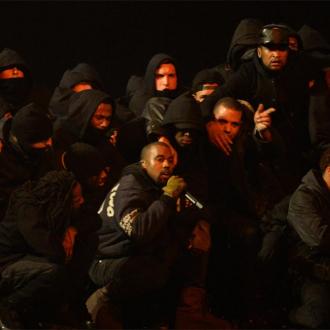 Kanye West performed a surprise show with Big Sean and Raekwon in London on Wednesday morning (04.03.15).

The 37-year-old rapper arrived on stage at KOKO in Camden, north London at 1am and was joined by a host of other musicians including British grime acts Skepta, Novelist, JME and Meridian Dan as well as Vic Mensa and Cyhi the Prince.

The 'Only One' singer announced the performance on Twitter earlier in the evening causing fans to rush to snap up tickets for the intimate gig, but fans were not left disappointed with the array of acts who performed for over an hour and a half.

Kicking off the performance, 32-year-old Skepta and JME performed their hit 'That's Not Me' before the rapper - who is married to Kim Kardashian West - arrived on stage to rap 'Mercy' with Big Sean.

Throughout the set, the individual acts showcased their own talents with Meridian Dan performing his hit 'German Whip' and 26-year-old Big Sean pleasing the crowd with his new single 'Blessings', during which Kanye knelt on the floor and pretended to pray.

The 'Goldigger' hitmaker's first solo track of the evening was his 'Cruel Summer' single 'Cold' which he began by getting the hyped-up crowd to sing the words to sampled track 'Cold As Ice' by Foreigner.

Meanwhile, premiering new music, 21-year-old hip hop star Vic Mensa debuted 'U Mad' while Kanye instead chose to take a trip down memory lane by revisiting popular tracks from his back catalogue including 'Jesus Walks', 'All Of The Lights' and 'Can't Tell Me Nothing' as well as several tunes from his sixth studio album, 'Yeezus'.

One notable track which was absent from the energetic show was Kanye's recent single 'Only One' which he wrote about his 18-month-old daughter North, although he did rap his Sia collaboration 'Wolves' which he recently premiered at New York Fashion Week.

Ending the surprise performance, all of the musical guests took to the stage one more for a rendition of the rapper's latest release 'All Day, which they returned to the stage to perform for a second time as an encore.

'Can't Tell Me Nothing'

'All Of The Lights'

'Blood On The Leaves'