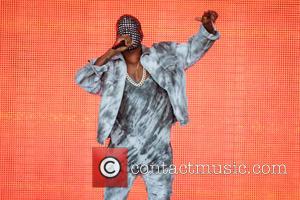 Kanye West became embroiled in a dispute with British dance music veteran Aphex Twin after the Dj accused the rapper of using a song sample without permission.

The British star, real name Richard James, has now revealed the sample prompted a dispute with West as he had to fight the rapper to gain recognition for his work.

He tells Pitchfork.com, "Is it a sample? I actually don't know what it ended up being in the end, I'm so slack. I know that he tried to f**king rip me off and claim that he'd written it, and they tried to get away with not paying. I was really helpful, and when they first sent it to me, I was like, 'Oh, I can re-do that for you, if you like,' because they'd sampled it really badly and time-stretched it... I was like, 'I'll just replay it for you at that speed if you want.' And they totally didn't even say 'hello' or 'thanks,' they just replied with, 'It's not yours, it's ours, and we're not even asking you any more.'"