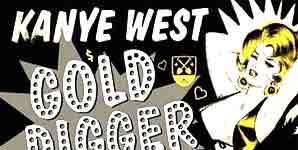 One of the biggest urban hits of 2005, without shadow of a doubt, a track that is helping Kanye's album by the boatload in the UK right now. Taking it's framework from Ray Charles "I Got A Woman" and using the man who played him in the movie Jamie Foxx as the vocalist. Jamie's voice is so uncannily like Ray's that had ray not died last year I'm sure someone would have claimed that Jamie was Ray's reincarnation. In club land this is dropping more than like it's hot, believe that. A monster on radio, in clubs and on video TV to the max. A hit of Jurassic proportions and guaranteed to be Kanye's biggest hit to date. A real hip hop masterstroke from the undisputed king of da shit.