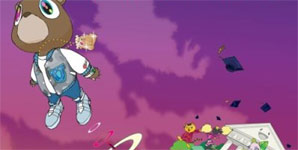 Having thoroughly whomped Fiddy in the not-at-all-for-publicity-even-though-they're-on-the-same-record-label retirement war, Kanye West will have every right to pat himself on the back for a job well done, because not only did this album sell more than 50 Cent, it is immeasurably better.

Graduation is arguably West's most accomplished record to date; sure, it doesn't have the sheer nostalgic thrills of College Dropout or Late Registration, but as a cohesive piece of music, it is without compare in mainstream rap.

At fourteen tracks, it is a much more lean and economical listen than Late Registration, with none of the pointless 'skits' that served only to exercise your track skipping finger. Lyrically, the album is something of a change too; while the day-glo bravado is still there, it's tinged with a hint of self-doubt, most pointedly on the reflective 'Everything I Am'.

The rather disappointing lead-off single 'Stronger' lead some to expect an electro sounding record, and in a sense they were right, although probably not in the way they expected.

Thankfully, 'Stronger' is the low-point of the album, the superior moments coming when West's production really cuts loose on more experimental sounds. 'Drunk and Hot Girls' is a druggy, slowed-down triumph, with Mos Def lending his vocals to woozy, shuffling beats, and 'I Wonder' manages to take a Labi Siffre sample and make it sound positively alien.

Admittedly, there's nothing with the immediacy of 'Jesus Walks' or 'Gold Digger' on here, but that's part of the charm. Graduation is probably the finest mainstream US hip-hop album of the year because of its seeming lack of concern for hits, even though you know that the man behind the beats is supremely confident that they're present in abundance.

Another tour-de-force by the most prolific man in rap; Kanye West is at the peak of his powers.