Review of Touch The Sky Single by Kanye West 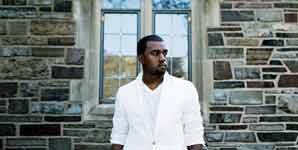 You know what genius isn't a word used enough throughout the world, when expressing the talent of black music artists. For sure there has been lots of credit given to the likes of Marvin Gaye, Michael Jackson, Prince and Stevie Wonder for example and genius normally pops up in a conversation when they are mentioned. But where hip hop is concerned its rarely used. Well Kanye West is 100% bonifide genius. He knows how to play the industry, he knows how to make hit records, not just for himself either, is there a finer black music producer around today. With a stack of nominations under his belt at the Grammy's and the Brits this man should walk away with an arm full. This latest single is beyond genius, using the horn blasts from the Curtis Mayfield soul classic "Move On Up" and a lyrical content and rhyme delivery that is simply jaw dropping and second to none. Another Kanye masterpiece, you bet.