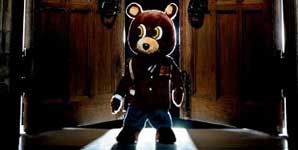 There are few artists that make the transition from being a producer or writer to an artist. A rare breed have longevity and further success and even fewer make it to worldwide superstar status and even more so in the world of Hip-Hop. To say this is a rarity is an understatement. However, both myself and fellow co-hort Bigger, (who may I add went to the concert on a different night to myself) were quite simply blown away by the man who calls himself the "Louis Vuitton" don the other night.

As myself and a close friend of mine went in search of the Hammersmith Apollo, having parked 15 minutes away (traffic being appalling within the vicinity) from the venue, we were faced with the heavens opening heavily. On arrival, we shook off our drenched coats and to our demise we had missed the support acts, to which I profusely cursed, however the billed supporting act, the very talented "Keisha Cole" had in fact apparently missed her flight from the U.S. so I had in actual fact missed next to nothing in terms of live performances."

At 9.10, the huge white curtain that covered the stage opened revealing a quite astonishing display. A quartet of violin players, a pair of oboe players a Harpist, 2 backing vocalists and a dj, behind all of which was huge projection screen that began playing the new video "Touch the sky." After the first chorus, the video ceased playing and the orchestra played the opening track "Diamonds from Sierra Leone" as Kanye graced the middle of the stage on top a small staircase with spotlights at ground level wearing white framed sunglasses, a white half-sleeved shirt and what looked like navy jeans, with of course traditional crisp "wear them once and throw them out" white sneakersâ¦ oops I meant trainers! "

The reaction from the crowd from the first lyric quite literally spoke volumes, it was electric and quite deafening, but not in your traditional manner of teenage girls at a boy band concertâ¦ This was a different type of roaringâ¦from a very mixed audience both in terms of age and race, and were in full vocal in terms of sheer awe and delight as Kanye himself just bounced off the energy. After the opening track came the more recent single "Heard em' say" (the pop anthem featuring Maroon 5 front man Adam Levine) and then the hard-hitting "Addicton" to which the crowd quietened down. (This may I add has not been a single in its own right thus far).

After a moment's respite, back he came with the hilarious "Work-out plan" sending the crowd into raptures once more, especially when the DJ played the Eurythmics classic "Sweet dreams" immediately after, with the projection screen displaying a lip-synching Annie Lennox! The show had only been going for 20 minutes and I had felt like I had had my money's worth, as a result of the showmanship and superb atmosphere.

"Get em high" followed, (The Talib Kweli collaboration) with an awesome acapella at the beginning, sending the crowds hands further higher in the air and the very "dark sounding" and "hard as nails" track "Crack music" was next in line, much to my surprise and this was followed by, and I quote 'one of Kanye's personal favourites' "Spaceship"

The next part of the gig, showcased the orchestra, as they played The Verve's "Bitter sweet symphony" with that infamous violin intro being the highlight. One player in particular was as passionate as I've ever seen, who wore a white ensemble and was frequently out of her chair and nodding along to the beats throughout the night!

Kanye, then returned to the stage and performed the sweet sounding "Hey Mama" with a break-down that illustrated the all encompassing atmosphere, as all 4,000 people clapped in unison to the beat. A sight that will live in my memory for many years to come.

Another brief interval followed with the dj showing off his scratching skills teasing the crowd with other Kanye penned/produced tracks of yesteryear including Jay-Z's "H.O.V.A" and Alicia Keys' "You don't know my name" The track that followed was the urban anthem, "All falls down" and this was then followed by the first and only costume change (well a red coat on top of what he was already wearing!) as he performed his biggest hit to date, the classic "Gold digger." and this, not surprisingly got the biggest cheer of the night. (Even some record company execs were out of their seats for this one! Mentioning no names, ahemâ¦ "Rob Pascoe, Mark rankin!" Also, for once, even Kanye himself strutted his stuff, with some rhythm and style aswell may I add, in this extended version of the song as yours truly had almost lost his voice by this stage, due to the excessive hollering!

A short burst of the superb "Slow Jamz" was next in line and a brief old school set from the DJ including A-Ha's "Take on me." His debut single "Through the wire" came soon after, with a video showing him in E.R, after the horrific accident during this torrid time of his life, which only spurred Kanye further, with his career and the illustrated the song, and has one of my favourite lines "The doctors said I had blood-clots, but I ain't Jamaican man!"

The spine tingling and controversial "Jesus walks" was greeted with more roars and plaudits and this song, in my eyes really sums up the man, as he whole-heartedly speaks his mind on the subject regardless and also spent a fortune of his own money on making another video for the record as he apparently wasn't happy enough with the original!

A plethora of scathing comments from the press then followed on the screen, largely expressing the star's apparent and obvious arrogance. (The fact that Mr. West actually likes his own music is considered sacrilege apparantley!) The quotes which were by in large, written at the time of release of his sophomore album "Late registration" (a time which every artist fears, even more so than their debut, as it is considered a jinx) and a brief encounter with the crowd as the comments flowed, explaining his fears and showing his appreciation for the fans continued support, as a closing speech introduced the finale, the new single, the brilliantly sampled "Touch the sky." A living hip-hop superstar was amongst us, and about time too!