All the anticipation surrounding Cruel Summer has been sandpapered away, bit by bit over the last couple of months, as snippets of the album have creeped into the public's consciousness, through various cracks in the Yeezy barricades. He's played some of the tracks himself, whilst he's just happened to be out in the clubs and just happened to have his laptop on him. And the press have been gorging on the lyrical content of Kanye's latest rhymes - especially if they just so happen to make reference to his latest squeeze Kim Kardashian, whom he spends his time praising for her celluloid bedroom adventures and, apparently, for being a 'perfect/bad bitch.' 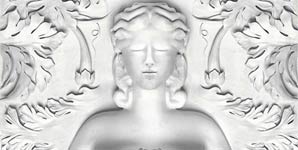 Even if you'd managed to escape these snippets of early information, listening to 'Cruel Summer' probably won't supply you with too much in the way of surprise; there's a generous dose of low-level misogyny, the obligatory platinum-plated braggadocio that we've come to expect from rap's heavyweights and of course, Kanye's rolling delivery providing some kind of bizarre hypnotic effect, throughout. From the outset, Cruel Summer is marked by Kanye's trademark self-aggrandising style as he and R. Kelly - sounding more like a pair of teenagers, riled on Buckfast and methamphetamines than a couple of grown men doused in cocaine and Cristal - open 'To The World' imploring "I'm doing things my way / it's my way or the highway. let me see ya / put your middle fingers up.mother f*cker."

There's not much in the way of content to raise Kanye's latest collaborative mixtape above any other mainstream hip-hop offerings doing the rounds right now. Ironically, though its being sold on the back of his rep, it's the tracks in which Kanye takes a back seat and lets his pals do the driving, that attention peaks. Kid Cudi's delivery on 'Creepers' is playful and addictive; as he lilts "if I had one wish, it'd be to have more wishes," it's kinda endearing; more so than the majority of the aggressive rhymes spouted elsewhere. Granted, along with his pals, Cudi has yet to learn that there are other words for female humans than "bitch" but putting that (pretty major) transgression to one side, he has at least supplied a difference of tone to an otherwise homogenised collection of predictable 2012 hip-hop standards.

There are moments of excellence in amongst the homogeny, it's worth noting. There's some great word-play on 'New God Flow.1' featuring Kanye, Ghostface Killah and Pusha T and the closing track 'Don't Like' channels the collective machismo neatly, with the refrain "that's that sh*t that I don't like," Big Sean, Jadakiss and Chief Keef roll out a tidy groove that sets itself apart from the 50-odd minutes that precede it. He may have saved the best 'til last but it's barely enough to raise Cruel Summer above the parapet of the tired conventions of hip-hop.