Kaley Cuoco Sweeting, after undergoing surgery on her nose in order to treat a sinus problem, shared a picture of her husband with fans and described him as "perfection" and a "beautiful angel of a man".

Kaley Cuoco Sweeting has undergone sinus surgery and, whilst recovering, shared an intimate and truly lovely scene from her marriage. 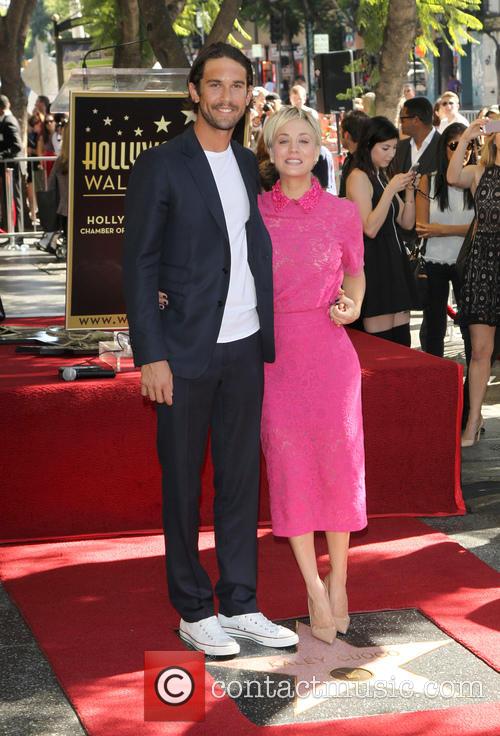 Ryan Sweeting and Kaley Cuoco Sweeting at the unveiling of Cuoco's star on the Hollywood Walk of Fame.

Cuoco Sweeting has recently undergone surgery on her nose in order to treat a sinus problem. Her husband, tennis player Ryan Sweeting, was right by his wife's side throughout the whole ordeal. Whilst recovering Cuoco Sweeting had some time to appreciate how supportive her husband is and how he takes "amazing care" of her.

Cuoco Sweeting, who stars in The Big Bang Theory as Penny, posted a picture on Instagram on Friday (26th December) in which she and Cuoco Sweeting were pictured cuddled up. Cuoco Sweeting, with a tube in her nose and a bandage across one nostril, smiled as she nestled up to her seemingly sleeping husband. Cuoco Sweeting also added a touching caption to the image.

Cuoco Sweeting wrote: "Coming out of sinus surgery and the first thing I see is my beautiful angel of a man, he's right there. Always. He's taking amazing care of me. I love my noodle. He's perfection."

The couple will celebrate their first anniversary on New Year's Eve. The couple began dating during summer 2013 and their first public appearance was at the 65th Primetime Emmy Awards in September of the same year. Their relationship can only be described as a whirlwind romance as Sweeting proposed to The Big Bang actress the same month. The couple married in front of 150 guests, including Cuoco Sweeting's Big Bang Theory co-stars, on December 31st 2013 and saw the New Year in as newlyweds.

Update: Cuoco Sweeting also hit back at her Instagram followers who were suggesting her 'sinus problem' was actually a nose job. On Sunday (28th December), Cuoco Sweeting uploaded a picture montage on to Instagram showing her recovering in bed. She explained how she'd been putting the surgery off for some time and thanked her husband and pets for their support.

Cuoco Sweeting wrote "I have been putting sinus surgery off for year, and I finally did- and for this who think I got a nose job thinks again! (Wish) thank you to my amazing husband and sweet dogs for watching over me."

Read More: Kaley Cuoco Sweeting Made 'A Joke' Out Of 'The Fappening' Nude Photo Leaks.

Coming out of sinus surgery and the first thing I see is my beautiful angel of a man, hes right there . Always . He's taking amazing care of me ?i love my noodle . Hes perfection. ??

I have been putting sinus surgery off for year, and I finally did- and for this who think I got a nose nob thinks again ! (Wish) thAnk you to my amazing husband and sweet dogs for watching over me ??????