'The Big Bang Theory' star admits marrying her tennis star husband was fast, but she adamantly states: "When we met, I knew he was the one." 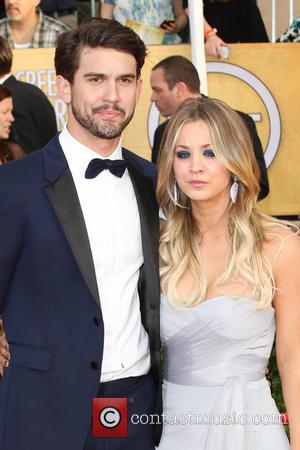 Kaley Cuoco-Sweeting doesn’t waste any time when it comes to relationships.

Cuoco shocked her firend and family after announcing her engagement to Sweeting after only three months of dating this past September (2013).

Even more surprising was that they married three months after that on New Year’s Eve.

While covering the May issue of Cosmopolitan, ‘The Big Bang Theory’ star opens up about their speedy relationship.

"I admit it happened fast, but that's who I am. When we met, I knew he was the one," she tells the magazine. "[At my wedding], I felt like a rock star and a badass. What was amazing in that room, it was so full of love.”

“It was like nothing I'd ever been to before, and it was exactly what we wanted it to be,” she continued. “It was the eighth wonder of the world, the greatest wedding of all time."

More intriguingly, her ex-boyfriend and ‘Big Bang’ co-star Johnny Galecki was there to witness her tie the knot.

"It took a minute, a bit of awkwardness," Cuoco-Sweeting admits, when referring to working with her ex. "By the grace of God, we became best buddies and moved on in such an elegant way. [He's] one of my closest friends. He was in the front row at my wedding, with a huge smile on his face."

Even though Kaley is happily married, not all is well in her personal life. The blonde beauty revealed she gets upset when reading social media comments about her appearance.

"I started reading [them] and thought, 'Maybe I need to make more of an effort and not go out in my UGGs and be disgusting.' So I started putting on makeup,” she states. “And they started writing, 'Wow, someone really likes being in front of the camera' and 'Her hair's done now for coffee.' I couldn't do anything right. Why am I reading this stuff? But I'm obsessed. I openly admit to being totally insane about that.”

The May issue of Cosmopolitan hits newsstands on April 8th.