Kaley Cuoco appeared on 'The Ellen Degeneres Show' yesterday (6th November) and wed her fiancé on air. But don't worry, it's not a legally binding ceremony! This is not the first fake wedding the 'Big Bang Theory' star has been involved in as she was on set of 'The Wedding Ringer' in a white dress, but with a very different groom!

Kaley Cuoco and her fiancé, Ryan Sweeting, had an informal wedding rehearsal on national television when they appeared on The Ellen Degeneres Show on Wednesday 6th November. Cuoco joined Ellen and discussed her engagement. 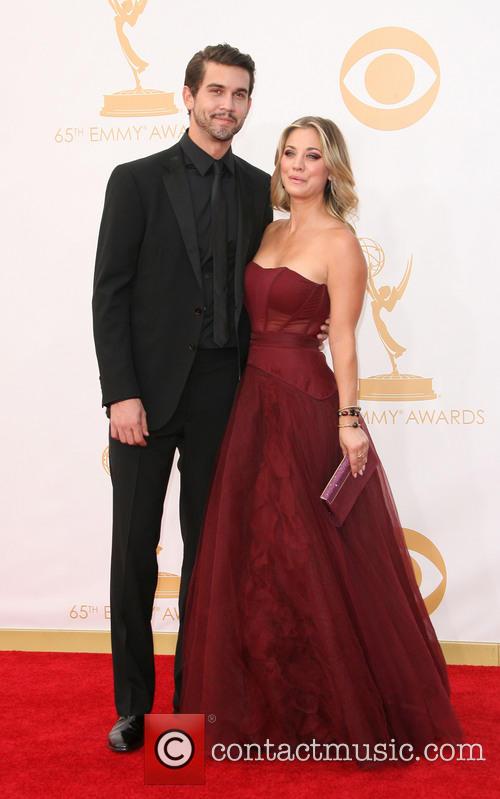 The couple at the 65th Emmy Awards, shortly before their engagement.

Ellen then thrust an impromptu wedding on her and Sweeting. In a strange twist of fate, something Cuoco also commented on, she was even wearing a white dress! The ceremony was carried out by one of the show's writers, although Sweetling appeared to be slightly hesitant about the fake wedding asking "This isn't legal right?"

Cuoco and Sweeting, a professional tennis player, have been dating since June of this year. They announced their engagement in September. Despite their relatively short relationship, Cuoco told Ellen she knew Sweeting was the one from the beginning of their relationship. She said "By Day 2, it was so unbelievable, I said, 'This is it.' I know it looks a little crazy to some people."

This is not the first time the 27-year-old actress has worn a wedding dress recently or had a fake wedding! Cuoco is starring in the upcoming comedy The Wedding Ringer. Last week she posted a number of photographs on Instagram from the set showing her in a wedding dress. Sweeting even visited on set and the photograph Cuoco took was uploaded on to her Instagram account with the caption "I think he's auditioning me - Hope I pass!"