'The Big Bang Theory' star Kaley Cuoco knew she would cause ''a stir'' when she uploaded a photograph of herself in a wedding dress to Instagram. 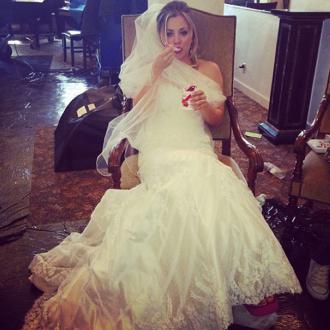 Kaley Cuoco tried to cause ''a stir'' by posting a photo of herself in a wedding dress.

The 27-year-old actress - who recently got engaged to Ryan Sweeting - had uploaded a picture of her in a gown to Instagram, but it was actually taken from an upcoming film role.

''It's so funny, I've been in a wedding dress every day on this movie so I figured I'd post a picture of me in my dress because I knew it would cause a ripple effect.''

Despite liking the look of the dress in the photograph - which was captioned with ''It's my wedding day!!!! #theweddingringer #fakeweddingcalmdown (sic)'' - the 'Big Bang Theory' star insisted it's not her style.

She added: ''I like the dress for this character. My dress will be nothing like that. Let's put it that way.

''It could be the direct opposite, if that makes any sense. But I love it for the movie, but not for me.''