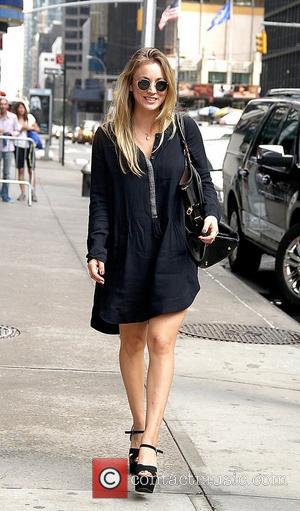 Big Bang Theory star Kaley Cuoco and boyfriend Josh Resnik announced their engagement on Tuesday (October 25th 2011), but a date for the wedding is yet to be announced, reports People Magazine.
Cuoco has found her star rising ever since appearing on ABC series '8 Simple Rules' back in 2004, in which she played the eldest of two daughters defying their father's parenting. In 2007, she gained international prominence playing the role of Penny in 'The Big Bang Theory,' a show which has since gone from strength to strength with the 26 year-old's salary reportedly raised from $60,000 to $200,000 per episode. This year she has also appeared in two films, playing Wanda in the well-received 'The Last Ride' - a film focusing on the last days of Hank Williams - and the slightly less successful children's animation 'Hop.'
Cuoco has kept her feet rooted firmly on the ground though and has chosen to marry her current boyfriend Resnik, who works as an addiction specialist. A representative of the couple said, "The surprise proposal took place during a quiet date night at home", adding, "The couple are very happy and excited to begin planning their wedding". The actress had previously dated her 'Big Bang Theory' co-star Johnny Galecki for two years.