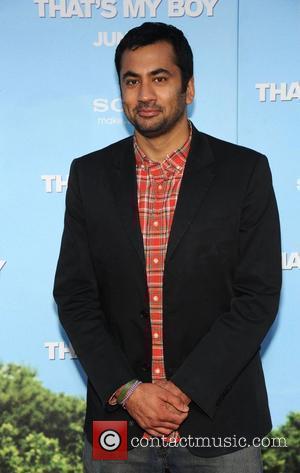 Kal Penn - the Hollywood actor and former White House staffer - took to the podium at the Democratic National Convention in North Carolina on Tuesday evening (September 4, 2012), delighting the gathered crowds by taking aim at Clint Eastwood's speech from last week.
Oscar winner Eastwood addressed the Republican convention on Thursday, though became the target of mockery after delivering a strange skit in which he spoke to an empty chair (on which an invisible Barack Obama was apparently sitting). Penn - best known for his turn in stoner-comedy 'Harold and Kumar' - wasted no time in referencing Eastwood. Noting that his favourite job was working for "a boss who gave the order to take out Bin Laden and who's cool with all of us getting gay married", Penn slyly added, "So thank you, invisible man in the chair, for that". During an impressive speech, the actor decided against going after Eastwood completely and simply encouraged the youth of America to back President Barack Obama at the forthcoming election. With his trademark humour, Kal urged, "We can't turn back now.I ask all of you young people to join me. You don't even have to put pants on. Go to commit.barackobama.com and register right there".
The President has plenty of celebrity support going into his re-election campaign: actor George Clooney recently threw him a fundraiser, while Jay Z and Kanye West have also thrown their support behind Obama. Nicki Minaj's Mitt Romney lyrics on a track for Lil Wayne's new mix-tape 'Dedication 4' strongly suggest that she's voting Republican.

"National Lampoon's Van Wilder: The Rise of Taj" is the sequel to the successful 2002...