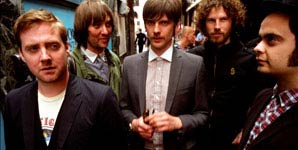 It doesn't seem long since the Kaiser Chiefs were last on the road, but they're back again for an arena tour which can only be described as pure quality.

Supported by Black Kids and Esser, Kaiser Chiefs proved exactly why they were the headlining act, and why 9,000 fans were gathered there.

The tour is obviously promoting, their album 'Off With Their Heads'. Although the third album may not have done as well as previous releases, there were quite a few tracks from this album. Those not yet owning it were easy to spot as the rest of us sang out loud. That's not to say that it was merely a showcase of new material. This was a run through of the best their entire back catalogue has to offer. 'Ruby', 'Heat Dies Down', 'I Predict A Riot' were all there and each one received screams of appreciation.

What you can say about Kaiser Chiefs is that they know what makes a good show and they deliver it on every level. Their tracks lend themselves brilliantly to the arena environment. Catchy lyrics, fist punching choruses, and energetically loud beats fill the massive space and make it easy fro everyone to join in and have a great time.

I guess you could say that whilst the band as a whole is good at what they do and in creating the right atmosphere, Ricky Wilson is the real personality. He is a genuine showman, making a Kaiser Chiefs gig more than just watching a band.

Ricky Wilson is a true frontman. He's a show off and we all love him for it. Occasionally standing on various points of the stage to strike a pose, these were the only times we actually saw him stand still. For the rest of a ninety minute set Ricky was either running, jumping, spinning, or climbing the lighting rigs.

By far his most impressive move was to suddenly disappear from the main stage and reappear at the back of the arena on a well lit pedestal. Getting us all to scream to his chants of 'We are the Kaiser Chiefs' we were all getting the thrills of an amazing gig.


For a band who sings about everything being average these days, a Kaiser Chiefs gig is far, far away from being average!