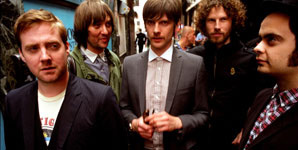 Leeds band The Kaiser Chiefs have been thrust upon us and come a long way over the past three years. Last weekend the post punk indie five piece could have more than filled what was an intimate venue for such a big name.

For a band claiming not to want to be predictable, they did start off that way. Straight into a track, followed by another, followed by current single 'Never Miss a Beat'. Yes they were good, but where was the charisma?

Whether frontman Ricky Wilson noticed, or it was all planned this way remains to be seen, but there came a point when the band suddenly came to life. It was actually during 'Everyday I Love You Less and Less', when Ricky jumped from the stage, got in amongst the crowd, and shouted for us all to get up and enjoy ourselves. From that point on, Kaiser Chiefs were amazing.

With a new album out this week it was inevitable that we would hear a lot of tracks from 'Off With Their Heads' - It's all in the marketing. But it was obviously the well known hits that really worked on the night, and the band knew it.

'The Angry Mob', 'Ruby', 'Modern Way' - all just as good live as they are on the albums, which is not something true for all bands. The catchy and addictive lyrics meant that a full De Montford Hall could all sing a long amongst a great atmosphere.

When the crowd got excited, Kaiser Chiefs got excited. Apart from the music what really worked was the fact that Ricky Wilson knows how to keep a crowd going, and how to get them excited. He is not afraid to step over the boundaries of most bands and come into the crowd with the rest of us. At one point he divided the standing fans down the middle and came right to the back with a girl on his shoulders. Obviously everyone went mad and this set the scene for the rest of the night.

Kaiser Chiefs proved that they really are a British band with the right amount of attitude to really carry off what are essentially quite harsh and honest lyrics. It was loud, just the way Kaiser Chiefs music should be, and technically the lads were on top form. A lot of effort was put in. Each band member played off each other with amusing banter, comments to the audience, it all worked.

What I thought was going to be a disappointing return to the stage and end to the gig yet again proved me wrong. Ending on a high with 'I Predict a Riot', the band had the entire crowd jumping up and down, and screaming lyrics.

Predictable and conventional? Certainly not! Kaiser Chiefs do have an edge to them which really separates them from the rest of the indie bands we have now. It's not just about the way they sound, it's also the way in which they deliver themselves. To see Ricky suddenly throw himself onto the fans and do a spot of crowd surfing is not something you see all of the time. Neither is the whole band joining in with each other and playing the drums. It's the little things like that which made what was always going to be a good gig, a great one.

Although I have heard rumours that their new album is just more of the same, I would hold back from judgement and enjoy them for what they are. British indie punk with no sense of fear.