Kai Fish's new single, 'Cobalt Cheeks', is taken from his debut album 'Life in Monochrome', which will be released on September 26th, via Music for Wolves. Cobalt Cheeks is available to download now.

The video for 'Cobalt Cheeks' matches the dreamy quality of the song and sees Kai Fish singing while projections of him performing.

Kai Fish is probably best known for his work as bassist and vocalist in the London based indie band Mystery Jets. Formed in 2004, they released four albums; 'Making Dens'; 'Zootime'; 'Twenty One' and their most recent release, 'Serotonin'. Their single 'The Boy Who Ran Away' peaked at number 23 and earned Mystery Jets their one and only appearance on Top of the Pops. Other members of Mystery Jets include: Henry Harrison (lyrics, piano); Blaine Harrison (vocals, guitar and keyboards); William Rees (guitar, vocals) and Kapil Trivedi (drums).

Kai has also written for the likes of DJ Mark Ronson and London house duo The Count & Sinden. Kai is set to play at St Pancras Old Church, London and will announce more live dates soon. 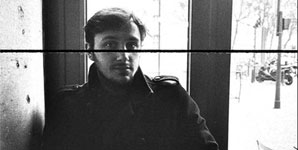